One of my common code review comments is about over-fetching from the database; e.g. running a SELECT * instead of SELECTing just the columns your application needs. This is very common when using object-relational mappers (ORM)s like EntityFramework (EF) or funneling access to your database using the repository pattern.

Time passes and technology evolves; I find it useful to re-evaluate my assumptions every now and then. Is over-fetching still something to worry about?

This post will run some benchmarks to get a better sense of the impact of over-fetching. I also have been wanting an excuse to learn BenchmarkDotNet, and this seemed like a decent problem.

Over-fetching occurs when our application reads more data from the database than it needs. Let’s walk through an example to demonstrate how easy it is to introduce over-fetching to a codebase.

Note: this example code is oversimplified and does not represent best practices.

Say we’re using the repository pattern and have this interface:

The IRepository implementation could use EF, it could use Dapper, ADO.NET, whatever. At this point that detail is irrelevant.

The GetCustomer implementation is ultimately going to run one or more queries and then map the results into a Customer instance. In the simplest case this might run a query like SELECT Name, Address, Email FROM Customers WHERE Id = ?.

Say we have a new feature request to send an email when a customer makes a payment. Our payment code currently looks like this:

At this point, we have a IRepository handy, and it’s very quick to add in emailing:

Re-using the pre-existing IRepository.GetCustomer introduces our over-fetch; ProcessPayment only needs the Email, but it’s going to get the whole object. An optimized version would issue a query like SELECT Email FROM Customers WHERE Id = ?.

This solution has a few downsides:

This solution has a few appealing upsides:

We could eliminate the over-fetch by adding something like IRepository.GetCustomerEmail, but that’s going to set a messy precedent that may lead to a million methods on IRepository. If IRepository is implemented with EF we could refactor to return IQueryable<Customer> and let the caller use Select to decide what to fetch, but that’s a bigger change that introduces it’s own set of pros and cons.

Does this over-fetching really matter? Let’s test it.

We’ll use BenchmarkDotNet to assess performance between SELECTing one column vs all the columns. We’ll test across a few variables:

We’ll run a SQL Server in docker, generate a database with EFCore, and then run our benchmarks. Every table will have an Id, Email, and Name, and our benchmarks will be fetching Email for a given Id. For the extra database columns we’ll cycle through some normal types (int, DateTimeOffset, etc) to generate a vaguely realistic mix. We’ll use AutoFixture to generate some varied test data.

I’ll run it all on my laptop:

The source code is up on github.

In hindsight, I made a couple of mistakes here:

The process took about 36m on my laptop, and I got some interesting results.

The results are pretty stark; we see a clear exponential increase in duration as we exponentially increase the table size, and selecting a single column gives consistent performance. It looks like for small tables, over-fetching doesn’t matter. 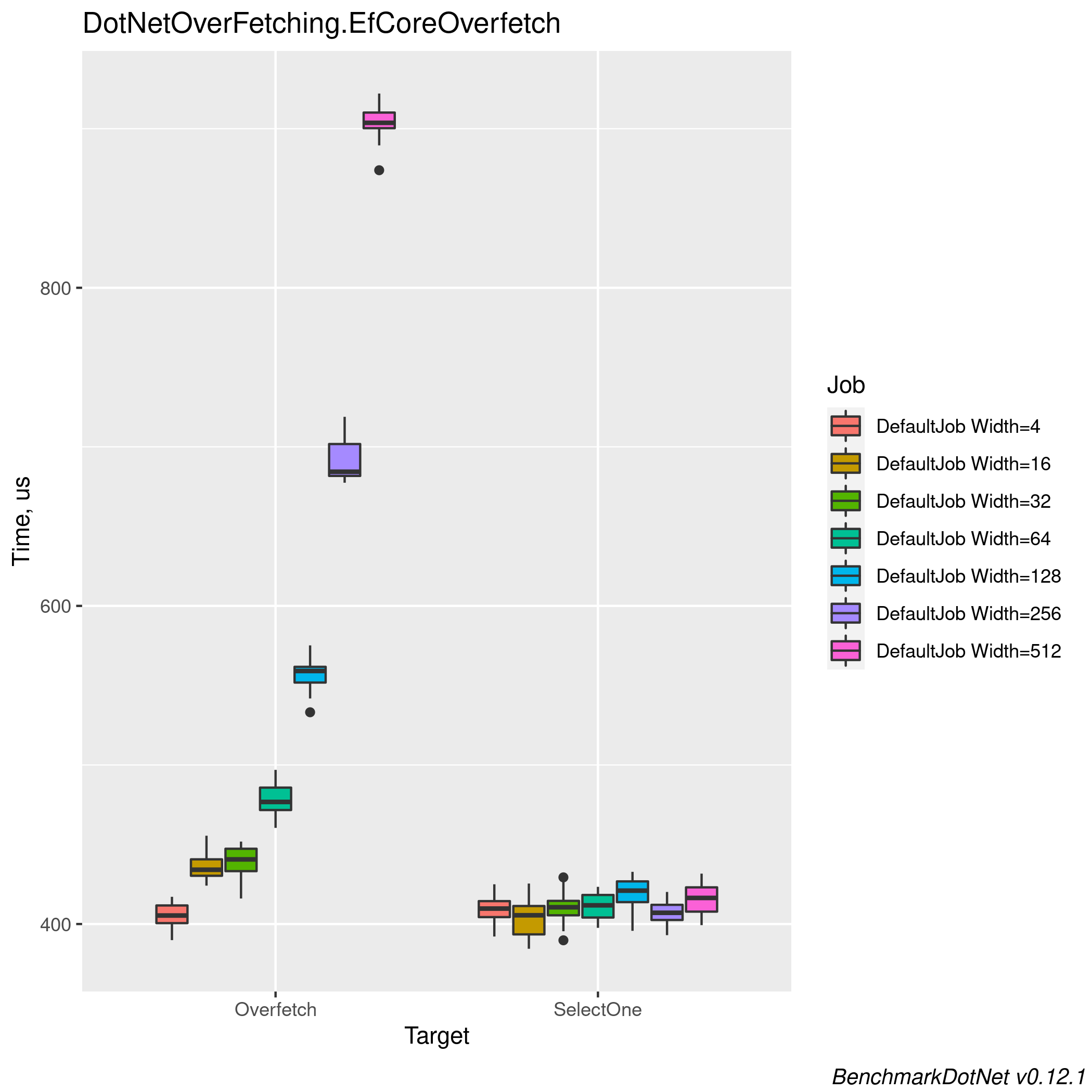 The results are pretty similar to the previous benchmark. It looks like AsNoTracking does not change much for duration nor allocation.

Dapper has similar behavior to EF, with a big shift when we hit the largest table:

BenchmarkDotNet gives us a lot of data, let’s take a closer look at that last run over-fetching a 512 column table: 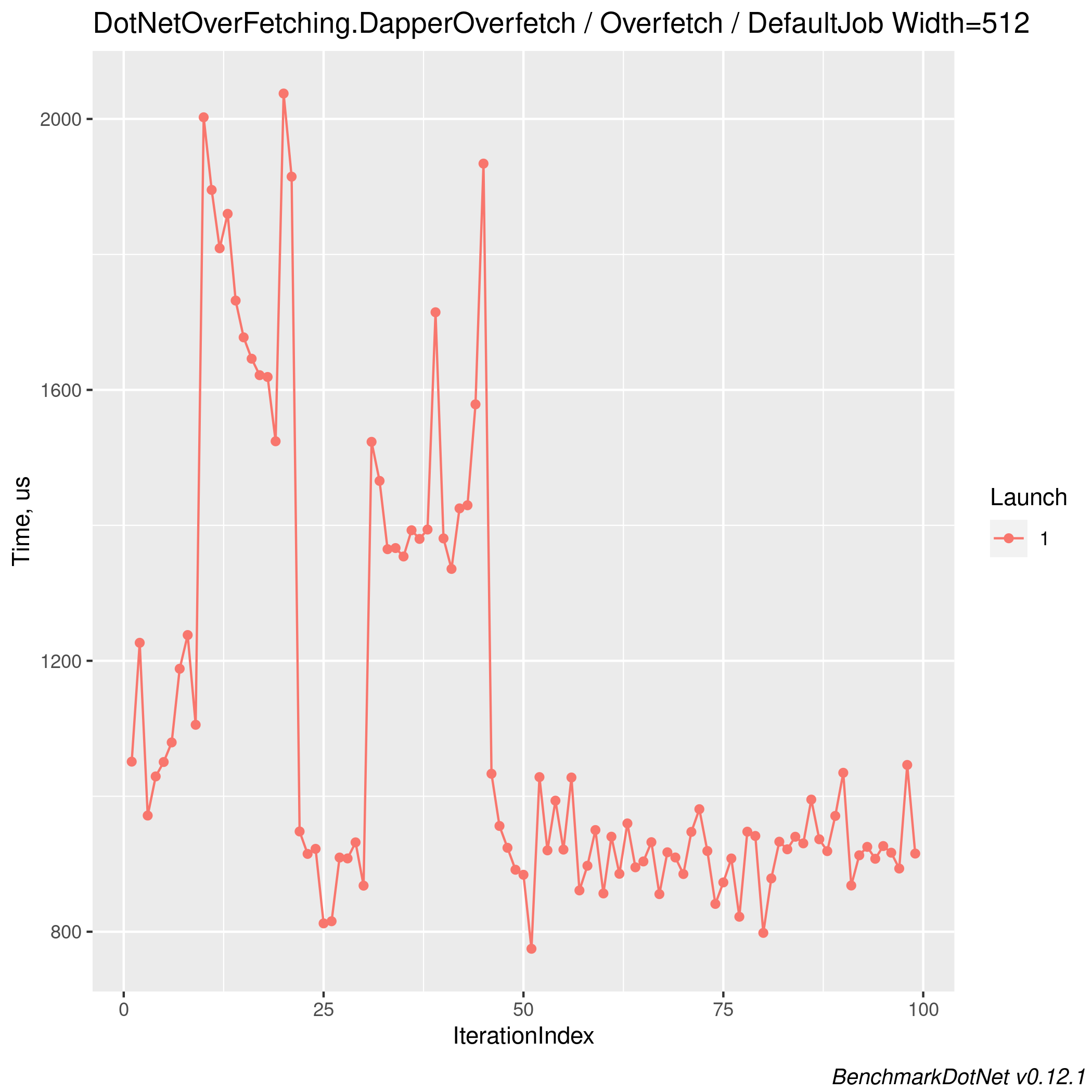 Looks like most of the runs were between 800 and 1000 μs, with a few slower clusters early on. Maybe something else was consuming resources on my laptop? This is part of why benchmarking is so difficult; really controlling the environment takes a lot of legwork.

The memory stats align with our assumptions: over-fetching allocates more and more memory.

I could see it easy to accumulate a lot of individually trivial over-fetching and end up with a “death of 1000 cuts” style performance problem. I really like the consistency we see from selecting only what is needed; that gives confidence to make changes to the database access layer without worrying about affects on existing code.

I think I’ll keep making the code review comment, but won’t block the review unless it’s a large table.

My favorite bugs with IDisposable

System.IDisposable is a foundational interface used in most .NET programs. Its primary purpose is to provide a mechanism for releasing “unmanaged” resources:...